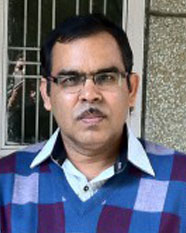 Dr. Madhusudan Karmakar joined Indian Institute of Management, Lucknow in December 2001 as Assistant Professor in the Finance and Accounting area, and was appointed Associated Professor in December 2004 and Professor in February 2012. He was also ONGC Chair Professor of Financial Management at IIM Lucknow from 5.1.2016 to 04.01.2019. Before joining IIM Lucknow, he was teaching at National Institute of Financial Management, Faridabad as Sr. Lecturer for a period from October 1999 to December 2001. He also taught at Assam Central University, Silchar as Lecturer during September 1994 to October 1999. He completed his Ph.D. from the University of North Bengal, Siliguri. In addition to teaching and research, he has served IIM Lucknow as Dean (Research), Chairman - Fellow Program in Management, and Chairman - Finance and Accounting Area. He was also Chief Editor of Metamorphosis, A Journal of Management Research of IIM Lucknow.